It feels very alien to be writing on here again given that I've been absent on here for the best part of a year.

A lot has happened in that time.
So I want to explain a little bit about where I've been and where I'm heading.

This blog post will also be a bit of a goodbye, but also a hello as well.
Hopefully that will become clearer as you read on.

When I last wrote a blog post on here at the beginning of this year, I was coming to terms with the experience and emotions stirred up having given a video recorded statement to the police for the first time about the sexual abuse I suffered as a child.
This continues to resonate as such a significant event and milestone in my life.
What I needed more than anything during the post-interview period was stability, structure, routine and distraction in my life in the present.
Sadly, that wasn't to be.
Instead, it felt like I was kicked while I was already down.

I don't want to go into this into all this in too much depth, as I have ranted on about it elsewhere, but basically the crux of the issue I have faced this year is that 6 months into my PhD, almost out of nowhere, I received an email from my department at university informing me that I could no longer study with them 'in light of my mental health condition' due to 'health and safety reasons'.
The mental health condition that I had an inclusion plan drawn up for and had engaged with all support provided. The mental health condition that I have had throughout the duration of all my previous studies, and which had never been seen as a problem.  I was subsequently subjected to countless other ill-founded comments and judgments, all of which were made without any formal risk assessment or consultation with mental health professionals who are actually qualified to comment on my condition.
It was discrimination, pure and simple.

This event sparked months of being left in a position of indefinite uncertainty, having to take legal advice in order to fight my case.
It certainly wasn't how I envisaged my year shaping out when I won my studentship and embarked upon my PhD.

The issue I was facing from my university got me down.
It got me down hugely.
I didn't want to let it, but sometimes when people strike you down with unswaying negativity, you can't help but start to doubt yourself.
I started suffering from a severe depressive episode on top of my usual struggles that come from living with CPTSD and DID.

My mental health deteriorated to an extent that I could never have predicted.
I am mindful of the fact that I started up this blog as I came out of a hospital admission following a mental health crisis over 4 years ago.  From that point onwards, I felt as though I rebuilt my life.  Never did I anticipate history repeating itself, but to some extent, it did.

The truth is that for most of this year I have been in crisis, culminating in a hospital admission during the summer at none other than the same hospital that I had previously been admitted to and
left traumatised by!

I wrote a blog post for the hospital blog about my admission, which can be found here.

In short, my hospital admission was a tremendously difficult experience in many ways,
but it also saved my life.
Unfortunately during this admission I witnessed an incident on the ward which traumatised me.
It was agreed that the ward was not a suitable place for someone with my particular difficulties.
I was transferred to the acute day service at the hospital, where I stayed through to the middle of September.
As a result of the traumatic incident I witnessed on the ward, I experienced a flare up of PTSD symptoms following my admission.
However, I have always tried not to lose sight of the more positive aspects of my admission...

I began to find my love and fight for life again.
I came out of hospital and fought my case against my university with renewed vigor and managed to negotiate a deal whereby I will be able to continue with my PhD in the future.  But, for now, I've interrupted my studies because after the year I've had, I decided I needed a break and also needed some time to get things more on track with my physical health.

That brings me to another key event of this year...
This year I found out that I have PoTS - Postural Orthostatic Tachycardia Syndrome.
It is a dysfunction of the autonomic nervous system which affects the heart.
It is not a life threatening condition, but is classed as a chronic illness, and the symptoms can be very debilitating.
I believe it likely that I have been suffering from PoTS for the past 4 years, but it has only been picked up in the past few months due to my symptoms becoming much more severe.
PoTS has changed my life a great deal, but it's also brought a lot to my life too.
It inspired me to start up a Youtube Channel sharing my experiences with a view to helping others.

I'd love to say that life was all plain sailing once I came out of hospital, but it certainly hasn't been.
It has been a bit of a battle to get the support I desperately need, particularly where my physical health is concerned. Think I am finally starting to get somewhere with it though, so fingers crossed!
I have felt very frustrated a lot of the time.
I have been pouring all my energies into applying for jobs, support, groups, volunteering, etc.
Despite my tireless efforts, my search for structure, routine and purpose in my life has been rather fruitless thus far.
What I've discovered is that it can be quite a long process to get involved in anything, or I face additional complications and delays to the process due to my physical health difficulties.
Following my admission, I felt more motivated than ever.
There were so many things I wanted to do and I felt like I had a better idea of what is important in my life - I concluded that I have always felt happiest and most fulfilled in life when helping others.
The reality is though that nothing of much meaning or importance to me has really happened in my life since my discharge from acute services.

Something that did happen though as a result of my hospital admission -
I seemed to let go of a lot of shame and felt more okay with myself than ever before.
I started to find my love for life again, and along with that my love for writing, sharing and blogging.
There was only one problem that was holding me back - I didn't feel like The One Day Seeker anymore.
I didn't feel a need to hide behind anonymity anymore.
I felt like I was ready to show everyone a bit more Lorna.
I hoped that it might help me to feel more connected with others and that, in turn, it might help others to feel more connected.
I first lifted my anonymity on Instagram and was overwhelmed by the positive response I received.
Ever since I have been working away on creating my new 'The Life of Lorna' blog and am finally ready to launch!
So yes, this is me...

As I said at the beginning, this post is a bit of a goodbye, but also a hello as well.
I have decided that it is time to say farewell to The One Day Seeker.
Before I do though, I want to say thank you so much to all of you who have been dedicated readers and supporters of my blog.  I started this blog at a very dark time in my life, but it came to map my journey out of it.  I like to think that if I've proven anything over the past few years, and particularly this year, it is that there is no place so low in life that you can't bring yourself back from, even if you have to do it twice!
I really hope that you will continue to follow my journey as it continues on The Life of Lorna.
I am going to keep The One Day Seeker live as a sort of archive and sister site.
Thanks again for all your kindness and encouragement.
Never lose hope.

Love and Strength,
Lorna xx
(formerly The One Day Seeker) 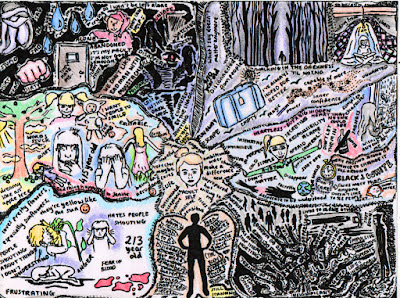 How A DID System Works - Navigating Being Me :)

A Guide to Dissociation

The One Day Seeker
Anonymous | 25 | Sussex CPTSD | DID | History of AN Survivor Mapping her journey through life's forest in the hope that one day things can and will get better...